How to backtest strategies and trade cryptocurrency with Python using freqtrade

In this first part, you'll see:

In the second part, we'll go into more advanced topics, such as:

Please be aware of freqtrade's disclaimer (paraphrased): "This software is for educational purposes only. Do not risk money which you are afraid to lose. USE THE SOFTWARE AT YOUR OWN RISK. THE AUTHORS AND ALL AFFILIATES ASSUME NO RESPONSIBILITY FOR YOUR TRADING RESULTS."

Always start by running a trading bot in a Dry-run and don't use real money until you understand how freqtrade works and the profit/loss you expect.

We strongly recommend you have basic Python knowledge so you can read the source code and understand the inner workings of the bot and the algorithms and techniques implemented inside.

This article is for educational purposes only, and we do not advise you to do anything with it. A trading bot comes with no guarantees, even if it does well on backtesting.

Freqtrade is a cryptocurrency algorithmic trading software written in Python.

It allows you to:

Ok, let's dive in by starting with the installation.

Docker - easiest method for all platforms

Docker is the quickest way to get started on all platforms and is the recommended approach for Windows. You will need to install Docker and docker-compose first, then make sure Docker is running by launching Docker Desktop.

You can now set up freqtrade by issuing the following commands in your desired directory:

You should now have the following directory structure:

For a direct installation on your system (Linux, MacOS, Windows) without Docker, I suggest you go directly to the documentation.

This step takes some time to complete and requires input to generate the initial configuration. Don't worry too much about this since we can change it later, but say "yes" to everything as a rule of thumb.

Note: the installation has created a virtualenv (.env) that we should always activate before doing anything with freqtrade.

We can use freqtrade commands. To verify the installation was successful, run

Important Note: If you install freqtrade directly, you won't need to preface your commands with docker-compose run --rm like we have in the remainder of this article.

To verify freqtrade is installed correctly and ready for use, issue the help command:

You should see the following output

The output of the help command shows all possible freqtrade commands. In this series, we are exploring the most important commands and how to use them. The first of which is backtesting.

We'll define the methods mentioned above, such as populate_indicators(), in the upcoming paragraphs.

To learn more, be sure to check out the relevant documentation page. It is particularly well-written and easy to read.

To perform backtesting, we need historical price data from an exchange. Let's start by downloading some data from Binance with the following command:

This command generated the file:

Which contains multiple open-high-low-close-volume (OHLCV) data artifacts like the following:

Where the columns mean the following:

This data can be representing neatly in the following candlestick chart:

How to read the graph above

The chart above uses candlesticks to represent much more information than just a simple line. You can see a quick depiction of what candlesticks mean in the following image.

If you recall the example OHLCV row from the previous section, you can see each candlestick represents the open, high, low, close part of each row of data. Many technical trading strategies look for candlestick patterns, which we may explore in later articles.

An excellent book for learning some of these patterns is Technical Analysis for Financial Markets. For a brief overview, you can also view Investopedia's article, Understanding Basic Candlestick Charts

Now that we've seen an example of the data and understand each row's meaning, let's move on to configuring freqtrade to run our strategy.

We have the required data for backtesting a strategy, but we need to create a config file, which will allow us to control several parameters of our strategy easily.

To create a new config, we run the following command:

You will see a few initial questions, to which we answered with the following values:

Before continuing, we need to open the config file and set pair_whitelist = ["ETH/BTC"], which establishes our coin-pair of interest. Then we are ready to go.

You don't need to worry about anything else for the time being, but you should make sure to understand what the other configuration options mean, so be sure to visit the relevant docs.

Here, we will be defining a simple moving average strategy similar to the one in the Python for Finance series. If you haven't read that yet, make sure to checkout. You can find more details in Investopedia.

I am going to tell you a little secret. Trading is really very simple, and you only have to do two things right:

That easy? What's the catch? The tricky thing is to find the actual low and high points.

The idea behind the Moving Average strategy is the following:

For our strategy, we will use the following indicators:

This is called a Moving Average Crossover Strategy.

Defining a custom strategy for freqtrade

Firstly, we need to create a new strategy file that will hold the logic behind our buy/sell signals.

Now, we can find the newly created file in the strategies folder:

To define our simple strategy, we need to update the following three functions:

Let's walk through each of these individually.

Here, we calculate the indicators needed by our strategy to produce buy/sell signals.

Notice that we are passing a dataframe as an argument, manipulating it, then returning it. Working with dataframes in this way is what all of our functions will be doing.

If you're interested in seeing indicators other than simple moving averages, have a look at the docs of ta-lib.

The function definitions in this class use type hinting to define argument and return value types.

This function populates our buy signal, which is triggered when the fast_MA crosses above the slow_MA in our strategy.

We can accomplish this by updating populate_buy_trend() to include the following logic:

Using qtpylib, we can easily find the crossover point. Essentially, the code above populates the buy column with a 1 when our buy condition (crossed_above) is triggered.

In a similar fashion to the previous function, this function populates our sell signal.

According to our strategy, this is when the fast_MA crosses below the slow_MA.

We're now using crossed_below—the opposite of crossed_above—which will populate the sell column with a 1 when our sell condition is triggered.

By default, the generated freqtrade strategy file includes more options, such as ROI (Return On Investment) and stop-loss, discussed in part two of the article series. We'll disable them for now:

Now that we have a strategy filled out, we can test how it would have performed on past data.

Having defined our simple strategy, now we want to evaluate it using historical data using backtesting, which allows us to place trades in the past to see how they would have performed.

Backtesting isn't a perfect representation of how well our strategy would have performed because other factors affect returns in live markets, such as slippage.

To perform backtesting with freqtrade, we can run the following command using the class and functions we just created:

The parameters in the above command are as follows:

We get a full report that contains the results of all our trades during the specified period.

1. Backtesting report This section shows a performance report for every coin pair, which in our case, is only ETH/BTC.

2. Sell reason stats This report shows us the performance of the sell reasons. Based on our strategy, we only used the sell signal, so we only have 1 row. Generally, we could also sell for other reasons such as accepted Return On Investment (ROI) and stop-loss. We will see this in the next article of the series.

3. Left Open Trades Report This part of the report shows any trades that were left open at the end of the backtesting. In our case, we don't have any and in general, it is not very important as it represents the ending state of the backtesting.

4. Summary metrics Personally, this is the area I usually look at first. The most important parts to point out are the following:

To understand the report in its entirety, make sure to read the relevant docs.

This result is not impressive, considering the risk involved. However, this strategy is as simple as it gets and has vast room for improvement:

Comparing to buy and hold Just holding ETH, i.e., converting our entire stack of BTC to ETH at the beginning of the testing period, we would gain 24.93% (market change indicator), but this is not something we can generally expect. We had far less exposure staking 10% of our stack per trade and not the whole of it. It is important to test our strategy in different conditions - that is not only when the market is growing, but also when it is shrinking.

Trading more coin-pairs We only considered Ethereum, which is one of the hundreds of coins we can trade. This limit only allows for one trade to happen at a time, which is clearly suboptimal.

Using more advanced strategies We used arguably one of the simplest strategies out there, which used only simple moving averages as indicators. Adding complexity doesn't necessarily mean better performance, but there's a massive number of indicator combinations we can backtest against eachother to find the best strategy.

Optimizing parameters Currently, we haven't attempted to optimized any hyperparameters, such as moving average period, return of investment, and stop-loss.

Smaller time periods We only considered daily candlesticks, which is one of the reasons why the bot finds only about 0.02 trades per day, making far fewer trades than a human trader. A bot can potentially make more profit by making more frequent trades and looking at more fine-detailed candlesticks.

To utilize freqtrade's plot commands, we will need to alter the docker-compose.yml file. The only thing we need to do is comment out one line and uncomment another. See the following excerpt from the file to see an example:

This tells docker-compose to pull the freqtrade Docker image that contains the correct plotting libraries.

We can now visualize our data, indicators, and buy/sell signals using the freqtrade plot-dataframe command.

The --indicators1 option defines the indicators we want to plot, namely fast_MA and slow_MA. These must be defined inside the strategy specified with the -s option.

By default, this creates a plotly html file available in the plot directory: ./user_data/plot/freqtrade-plot-ETH_BTC-1d.html

You can view a full version of this interactive plot here.

Hover over the plot to see how the bot actually does what we wanted it to do, as defined by our simple moving average strategy:

To see what else you can do with plot-dataframe, run docker-compose run --rm freqtrade plot-dataframe -h or visit the relevant docs.

In this article, we've seen just a glimpse of what we can do with freqtrade:

Follow us in the following article for more advanced usage of freqtrade, where we:

I want to acknowledge freqtrade's helpful, well-written documentation, from which this article has taken much inspiration. I'd like to thank the developers for their effort in creating such an fantastic tool for all of us to use.

Make sure to read more of the official freqtrade docs. 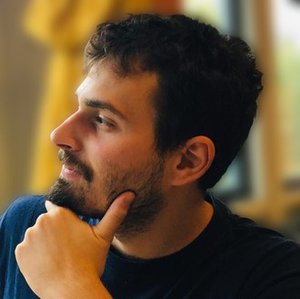 MEng in Electrical and Computer Engineering from NTUA Athens. MSc in Big Data Management and Analytics from ULB Brussels, UPC Barcelona and TUB Berlin. Has software engineering experience working at the European Organization for Nuclear Research (CERN). Currently he is working as a Research Data Scientist on a Deep Learning based fire risk prediction system.